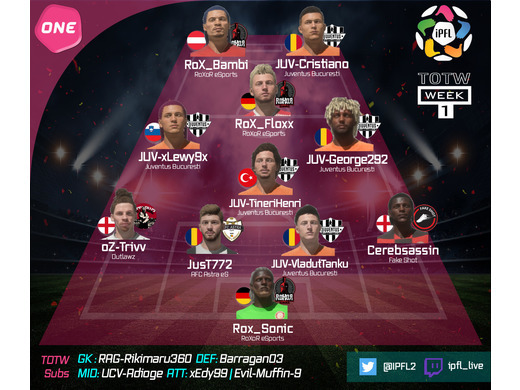 The IPFL officially kicked off with a bunch of impressive performances.  Some unexpected bulky results, but overall after the first 3 official games per team things in the table were looking more or less as we had forecasted.  Let’s jump into the TOTW 1 analysis.  Please keep in mind this constitutes the first official week, meaning the first 3 games of each team where applies.

RoX_B4mbii: The Austrian striker contributed with 4 goals, 4 assists and 2 MVP for his team. He also has an unusual contribution in his gameplay without the ball with a high figure of possessions and tackles won.

Juv-Cristiano: We have analysed the first 3 games from Juventus Bucuresti and after a hard deliberation we thought he had to be in TOTW 1 starting team.  Although his conversion rate was rather low, Cristiano is all about creating for his team mates. The Romanian attacker ended with 5 assists and 1 MVP.

Evil-Muffin-9: Okami might not have started with the most difficult schedule, but in the 2 games they played, the striker has completed 3 goals, 1 assist and 1 MVP for their team.  Considering the status condition from his team, he was extremely close to making the starting 11.


Juv-George292: Absolutely spectacular. The Romanian RAM was a complete delight to watch, and I’m not talking only about his 6 goals. He is pivotal in the way Juventus Bucuresti articulates their attack. 50 passes completed.  His plasticity, smart choices in passing and beautifully crafted goals makes him one of the players to watch for what’s coming ahead.

Juv-xLewy9x: The counterpart of George on the left side.  Trustworthy player. 9 key passes, 3 assists. Not the highest conversion rate, but the Slovenian player was an amazing asset for his team when it came to transition the ball from the back into the attackers.

xEdy99: The RM from FC U Craiova had an amazing first week. Impressive passing success rate with over 90 %. 1 goal, 1 assist. I have my eyes on this very interesting player.


Juv-TineriHenri: Possibly the best player of the first week. Cristiano warned us about this transfer and the Turkish CDM has not disappointed. This guy is like a range rover on the pitch. 25 possessions won!  13 interceptions!  9 tackles won!  But if that by itself wouldn’t be enough, the fella has also scored 2 goals and give 1 assist.  His first week was simply jaw dropping.

RoX_Floxx: Beautiful first week for the German attacking midfielder. This guy reminds of a Toni Kroos of sorts. 88 % pass success rate, 4 assists, 1 goal. Not the best conversion rate, but overall a very complete player in his first week in the IPFL.

UCV-Adioge: The Romanian midfielder from FC U Craiova had some serious stats in his first 3 performances.  Amazing passing, 1 goal, 1 assist. 100 % conversion rate.  We hope he will continue to provide at a similar lever in the coming games.

Cerebsassin: The English RB from Fake Shot had a fantastic debut in the IPFL.  With over 91 % pass success rate and 43 passes completed, he has shown himself a cornerstone in the build up side of his team.  From what we could see, hands down the best RB of the first IPFL week.

oZ-Trivv: Although Outlawz have sadly left the competition, this english LB merited to be in the TOTW 1.


JusT772: Gorgeous defensive stats from the Romanian CB. 14 possessions won, 11 interceptions, 1 MVP and 95 % pass success.  We were really impressed with the player from AFC Astra, particularly considering how tough a schedule they have fired off with. It can only get better.

JUV-VladutTanku: A LB who executed 37 passes with over a 97 % of pass success rate?  Well we love that!  Particularly in a week where the defence from Juventus wasn’t the busiest, this guy managed to shine with an impressive reliability.

Barragan03: Extremely interesting defender from the Polish side Tsunami.15 possessions won, 1 assist.  We thought the LCB worthed to be in the TOTW 1 subs.

RoX-Sonic: True, it wasn’t the busiest of weeks for somebody keeping RoXoR’s goal, but this guy demonstrated extreme reliability and virtually no forced mistakes.  Merited GK of the week for us.

Rikimaru: The british GK from Fake Shot only performed in 2 of their games, but, as usual, he showed himself  reliable and particularly performant distributing the ball from the back.