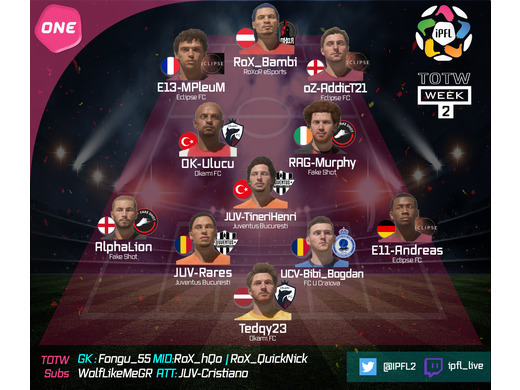 The IPFL TOTW-2 presents itself with some surprising appearances and some names which are called to become regulars it seems! Please keep in mind a couple of details regarding the data used and how we are manufacturing these awards: TOTW-2 comprises data regarding games 4, 5 and 6 for each respective team, in chronological order of play. That means that a team which played its game number 6 last Monday at 19:45, and their game number 7 the same day at 20:00, game number 6 was used for TOTW-2, and game number 7 will be used for TOTW-3. Also, there are teams who are getting default wins regarding team/s dropped from the competition, that of course has an impact in the number of games played, however it doesn’t mean a player with 2 games (or even 1 as you will see) cannot make it to the TOTW if their performance was remarkably strong. Let’s jump into it without further ado!

RoX-Bambi: 3 assists, 3 goals, 2 MOTM. The Austrian striker makes it again into the TOTW starting 11 proving himself as one of the deadliest goal scores in the competition, surely thanks as well to the exceptional performance from the rest of his team.

E13-MPleuM: Week 2 was absolutely impressive for Eclipse. The left wing Frenchman was the top scorer of the week with 4 goals (50 % conversion rate!). Add to that 1 assist and 1 MOTM to one of the best attackers of the week.

oz-AddicT21: In the right wing we have another player from Eclipse. 3 goals, 3 assists, 7 key passes!! Deadly stats for the English winger no doubt!

JUV-Cristiano: In the bench special mention for Cristiano who is a peculiar kind of striker, always generous with the ball, the Romanian again ends week 2 with an exceptional pass completion % (88). 1 assist and 2 goals.

OK-Ulucu: In my opinion the great surprise of the week. The Turkish midfielder was completely unleashed. No goals neither assists, but this guy ended with a 97 % of pass completion (41 passes out of 42). Furthermore, extraordinary possessions won with 17 and impressive 11 interceptions.

JUV-TineriHenri: No big surprise here, the range rover of the IPFL. This week he didn't accrued the incredible amount of goals and assists (considering his CDM position), but the lad ended with a 93 % pass success (70 out of 75), 19 possessions won (leading) and 9 interceptions. Brutal.

RAG-Murphy: Pretty solid week for the Irishman who led week 2 in amount of passes completed with 88 (90 % success), also leads in amount of successful tackles with 8. 1 goal and 14 possessions won.

RoX-QuickNick: Special mention for the midfielder from RoXoR. This guy is pure persistence and regularity. His stats are fresh out the washing machine! No goals, no assists, nothing exceptional, but hey, this guy ended with a 97,5 % pass success and I’m convinced he is a cornerstone which explains the success of his team.

RoX-hQo: Another one for another RoXor midfielder. This guy didn’t have his week when it came to passing around (only 70 % but in a very difficult position for doing that though), but he made it here with his 14 interceptions, 16 possessions won and 5 tackles.

AlphaLion: Although the English left back only played 1 game out of the 3, after long and hard analysis we decided he deserved to be in the TOTW. (VladutTanku from Juve was super close though). In only 1 game Alpha managed to complete 25 out of his 26 passes attempted, got 1 assist, 1 MOTM, 4 interceptions and 5 possessions won.

JUV-Rares: Amazing stuff from the Romanian CB from Bucuresti. 1 MOTM, 11 possessions won, 10 interceptions and 86 % of pass success rate. For me this guy means Reliability with a capital R.

UCV-Bibi_Bogdan: I absolutely loved the performances of this fella in week 2. Very sober defender, keep in mind guys that Craiova on week 2 had to face RoXoR and Juve Bucuresti and had possibly one of the hardest schedules one can get. With all and all, he managed to pull pretty hygienic stats and for me he totally deserves to be in the starting 11. Congrats!

E11-Andreas: The German right back from Eclipse had, along with all his team, a pretty solid week. 16 possessions won, 5 tackles and 2 key passes are the stats which elevated him where he is. Keep bringing the same stuff Andreas!

Tedqy23: Although it wasn’t the most difficult schedule for Okami during week 2, the Latvian keeper managed to keep his clean sheet in the 3 games he played. But what especially brought him here is the recognition from his teammates, 2 MOTM of 3! Well done lad!

Fongu_55: 1 MOTM and pretty decent week 2 for this player.